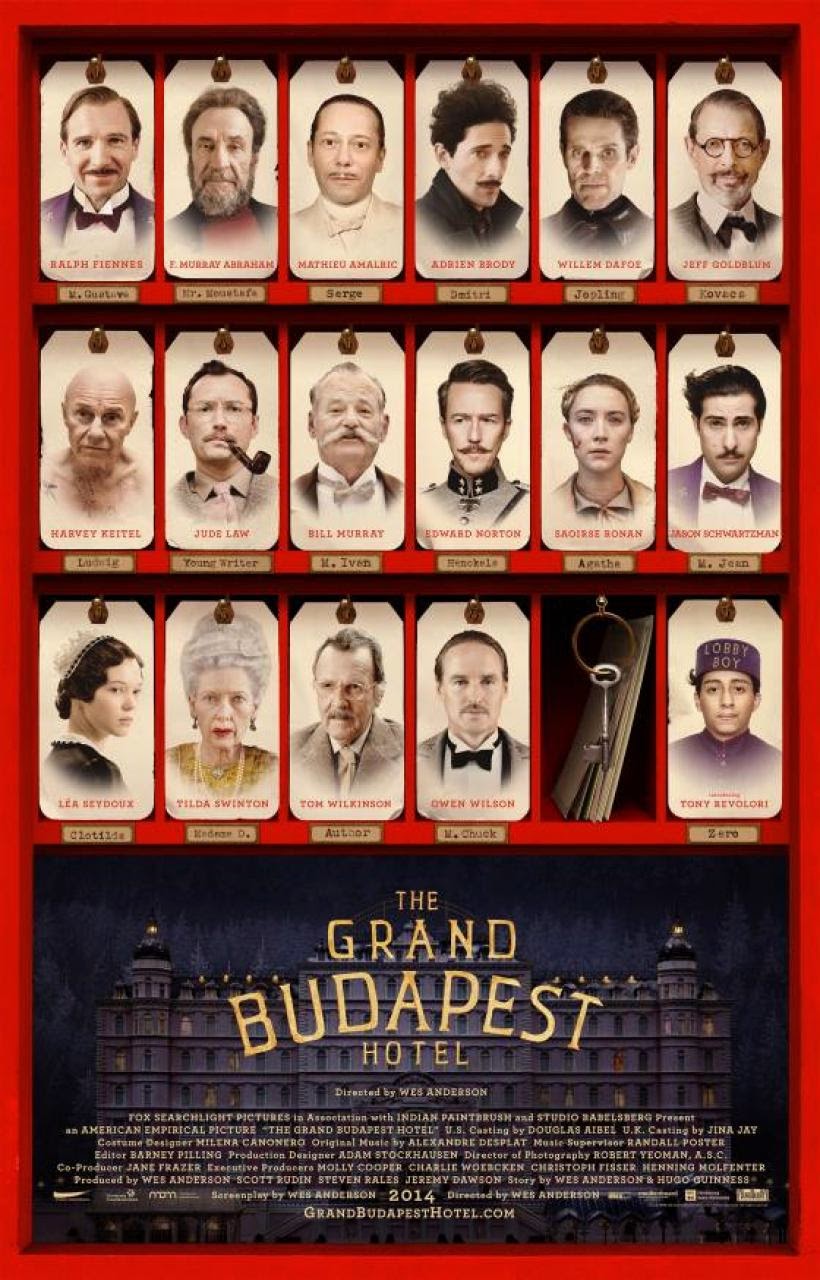 I really like several of Wes Anderson's movies, particularly The Royal Tenenbaums and Fantastic Mr. Fox. I did not particularly care for 2012's Moonrise Kingdom, which many found to be excellent. For me, it fell flat and at times was downright dull. But the trailer and the amazing, mostly all-star cast of his latest film had me intrigued, so when Q & Dale asked me to join them to see it tonight, I happily accepted. I needed to get out of the house and tonight was the first time in a several days I felt well enough (seasonal sinusitis) to do so.

The Grand Budapest Hotel is actually a story within a story, taking place mostly in 1932 in a made-up European country where most people speak in decidedly American accents and/or colloquialisms. Jude Law is a young writer spending time at the deteriorating titular hotel in 1985, where he meets the hotel's owner, a one Zero Mustafa (F. Murray Abraham), who tells him the story of how he came to own it. Flash back to 1932 when Zero was a young Lobby Boy under the tutelage of the ultimate Concierge, M. Gustave (Ralph Fiennes). Gustave is a bit of a lothario, wooing the hotel's elderly lady guests and wearing enough perfume to linger several minutes after he's passed. When his favorite guest, Madame D. (an unrecognizable Tilda Swinton) passes away, Gustave and young Zero (Tony Revolori, making his feature debut) become embroiled in an unlikely tale of murder, art theft, prison escapes and Nazi fascism.

Anderson's wicked sense of humor and very particular visual style are very much on display here. As Q said, "He certainly creates very specific worlds in his films." Oddly, that humor works against the more serious (and violent) aspects of the story and the improbable plot leaves much to be desired. And a rather glaring anachronism involving CPR jolted me right out of  the movie, which was a shame because it was a momentary visual joke that could easily have been replaced with something more period-appropriate.

The performances from the amazing and diverse cast, which also includes Jeff Goldblum; Jason Schwartzman; Edward Norton; Bill Murray; Soarsie Ronan; Adrian Brody; Willem Dafoe (in a weirdly hilarious turn as a particularly nasty assassin); Harvey Keitel; Owen Wilson and Tom Wilkinson, are uniformly excellent and appropriately quirky. But the heart of the film is young Zero and Revolori is simply delightful as a young man who only wants to be the best Lobby Boy ever. The one relationship I totally believed in the movie belonged to him and Fiennes. Teacher/student; father/son; brother/brother are all beautifully on display across the the course of the film. The production design, locations and costumes were all gorgeous and worthy of Anderson's visual palette.  I also must credit the Makeup and Hair team led by Mark Coulier, who will most certainly nominated for an Oscar on the basis of Ms Swinton's remarkable age transformation, alone. Honestly - had I not known it was her going in, I never would have recognized her.

While I enjoyed The Grand Budapest Hotel much more than Moonrise Kingdom, I still couldn't help but feel it was rather slight compared to his earlier work. That's not to say I didn't like it. I just didn't like it as much as I had hoped to. **1/2 (Two and a Half Out of Four Stars).

The Grand Budapest Hotel is rated 'R' by the MPAA for language, violence and brief nudity.

It pains me to ever disagree with you. MOONRISE KINGDOM.

Take no pain in this. Many of my friends disagree on that point. It's why they make vanilla and chocolate (as Mom used to say).