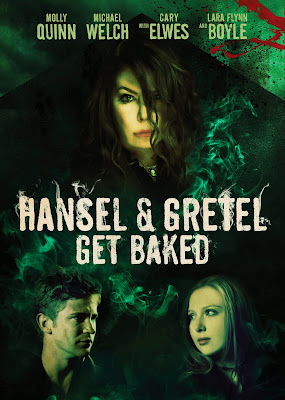 I suppose a preface of sort is required here. For the past 10 years or so, my rock, K has spent Christmas Eve with Mom and myself. In a beautiful post on Facebook, K expressed how she was going to miss those weird and wonderful nights now that Mom was gone. And since I'll be at my sister's for Christmas Eve this year (something already passed by the time this post is published - how freaky is that?), I proposed that we have a Christmas Eve Eve with many of the traditions we've shared for so long. We were joined by our sweet, funny, weird, wonderful and adorable friend Michael for a lovely candle-lit night of good food, good drink and very good company. Honestly, everyone should be so lucky to have friends like mine - I love and thank them so much.

Anyway... after dinner we decided to search Netflix for something to entertain us. K and Micheal searched through my personal list, which includes lots of movies only I (and a few of you... Pax...) would appreciate. And after an unabashedly intoxicated K had issues with the WiiMote, I took over, asking what they wanted to see. "Something funny!" they both said. So I went to the list of movies suggested because I'd watched Tucker and Dale vs Evil. I skipped along the menu until I hit upon a title that made me laugh and chose it, saying "If it sucks, we'll change it!" That title was Hansel & Gretel Get Baked. Starring "Castle" regular Molly Quinn as Gretel; the Twilight movies' Michael Welch as Hansel and a frighteningly over-surgeried and an almost unrecognizable Lara Flynn Boyle as a the immortal Bavarian-Nazi-Cannibal-Witch, Agnes who grows and sells enchanted dope to unsuspecting teens. Not surprisingly, the ingestion of those teens' flesh help both restore and maintain Agnes' youth.

Writer/Actor David Tillman's script is just clever enough to keep our interest, amusingly referencing  the story we all know and aided by costume designer Elizabeth Jett's very decidedly Tyrolean-inspired outfits for Ms Quinn. Add plenty of gross-out moments and hilarious puns (Agnes starts out as literally a 'Little Old Lady from Pasadena'), and Hansel & Gretel Get Baked ends up being a very funny modern take on the story via Cheech and Chong, where Skittles serve as breadcrumbs and hot young guys get slathered in herbed butter while strapped to a mortician's gurney. Cary Elwes makes a cameo as the Meter Man while a slew of other character actors you will recognize from every procedural TV show from the last 20 years crop up in other supporting roles.

Not everything works perfectly (Boyle's age makeups aren't quite convincing, though I suspect that may have more to do with her tragic cosmetic surgeries, than anything else). And some of the CGI FX (especially in the denouement) are a bit forced. But if you're looking for a funny, gory and gruesome distraction from all the Holiday nonsense you've been forced to endure in the past month or so, you could do certainly do worse than Hansel & Gretel Get Baked. I would definitely recommend it over the Big Studio crapfest that was Hansel &Gretel: Witch Hunters.


Screened at this year's Tribecca Film Festival, Hansel & Gretel Get Baked is currently available on Netflix and DVD. **1/2 (Two and a Half Out of Four Stars). Rated 'R' for Violence, Gore, Drug Use and Language, it was exactly what the three of us needed, even if K covered her eyes during the gory bits.