Last Words on this Topic 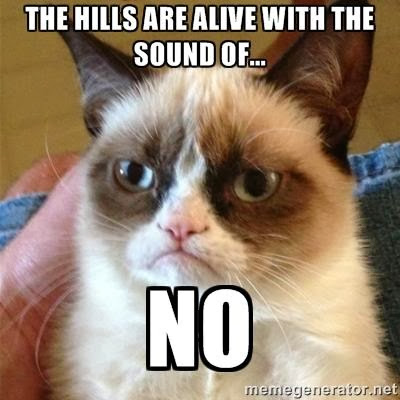 Okay, so maybe I was a bit premature. But I did say I'd post if something came up. And something actually has sort of blown up all over social media and I couldn't express everything I had to say about it in short bursts and comments on other people's timelines.

I'm sure you have figured out what I'm going to talk about from the the GrumpyCat meme pic I've posted to your right.

Uncle P's first experience seeing The Sound of Music was at a drive-in with Mom and my sister. I don't remember how old I was. It was certainly before the VHS boom of the late-70's and popular movies were often re-released to theatres many years after their initial runs. Mom thought we'd like it, so off the three of us went. That's almost all I really remember about it. I think I liked it. I do remember Mom telling us about a friend of hers who had left after the wedding scene (long movies often had intermissions) because she thought it was over. And unlike Mary Poppins,* it didn't make my sister cry because Mary left the Banks children. It undoubtedly had an influence on me. I have sung 'Edelweiss' for more auditions than almost any other song. And yes, it's old-school, Rogers and Hammerstein cheese. In fact, one of their cheesiest. But the film is a classic for so many reasons, Ms. Andrews' and Mr. Plummer's performances among the least of them. There is Robert Wise's amazing direction; the stunning scenery and photography; gorgeous period costumes and a score filled with songs that literally everyone in the Western world recognizes, if not knows the lyrics to. The movie is so beloved, that President Reagan rather infamously retreated from a G7 Summit which he was hosting, in order to watch it on TV.

You obviously think you know where this is going, but bear with me.

NBC presented an adaptation of the stage version of the show (in which Broadway legend Mary Martin originated the role of Maria) last Thursday. Twitter, Facebook and the blogosphere in general exploded with both negative and positive reviews, comments and what one of my Facebook friends called a "Snarknado." To be honest, I had no intention of watching it. Don't get me wrong - I've performed in my fair share of R&H shows - they are staples of high school and community theatre. I played Emile in South Pacific my senior year in high school. But give me Sondheim; Schwartz; Kander & Ebb; Rado & Ragni or Parker & Stone, anytime. Especially when it comes to a show like The Sound of Music, which is far better suited for the screen than the stage.

The night it aired, I caught about a total of 30 minutes or so, starting with "My Favorite Things." Not wanting to gawk at the the train wreck, I caught subsequent sections while moving between programs I had DVR'd earlier in the week. I witnessed unsuppressed accents; breathy singing; some really bad acting and even worse dialogue; anachronistic costumes and some pretty crappy sets.

What I did not see, was a Musical Theatre production. There was no live audience; no pauses for applause or laughter; no energy reflected back to cast to inspire them. I saw a talented singer with no acting experience thrust into an iconic role which she had no business playing. I saw some amazing actors left adrift and others taking command. And then there was Audra McDonald's stunning rendition of "Climb Every Mountain:"


Yes, so many of my theatre friends want to tout "The Sound of Music Live!" as an introduction to and inspiration for young theatre enthusiasts. And yes, it's wonderful that TV wants to bring us live performances (something NBC already does on SNL). But if you want to bring live theatre to the masses, then really shell out the bucks give them today's live theatre. I would have been glued to a live performance of Wicked or Pippin. Instead, NBC chose a 'safe' musical, did some stunt-casting and hoped Ms Underwood's fans would tune in, And while the ratings were pretty good, the criticism was less than kind, even among mainstream media. Time Magazine's review had this to say:

"When Carrie Underwood stepped out on the (wooded, not grassy) hills and started singing, I wished the hills were alive with the sound of hungry mountain lions." Ouch!

Trust me, NO ONE believes more in the power of the Performing Arts than Uncle P.  While a poorly produced and woefully miscast production from a rag-tag company in a Podunk town may be perfectly acceptable and delightful, we expect and deserve more from a multimillion dollar production on a major TV network.

*Speaking of Mary Poppins, I think if I only see one Holiday movie this year (though I hope to see a few), it has to be Saving Mr. Banks:

And in case you're wondering how all of this ties together, please remember that Julie Andrews won her only Oscar for playing... Mary Poppins. My dear dancer friend 'Lizard' and I were lucky enough to see her live in the Broadway production of Victor/Victoria and while she didn't quite have the range for which she was once so renowned, her stage presence alone was enough to make for an unforgettable theatrical event. That, my friends, is why so many of us hated "The Sound of Music Live!" and it's many missed opportunities.

I truly hope this isn't the last time we see such a grand experiment. I just hope it's done right, next time.

Rant over. Break starts now. Really. Unless some other idiotic thing gets stuck in my craw.  << sigh >>

More, anon (I suppose I have to go back that now, too).
Prospero
Posted by Prospero at 11:42 PM