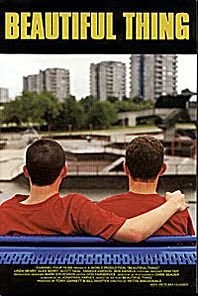 So, having last directed Top Girls for Shakespeare '70 and Die Mommie Die! for the JTMF almost 5 years ago, I am about to take up the mantle again with a sort of unusual production of Jonathan Harvey's groundbreaking 1993 play Beautiful Thing.

I say unusual not meaning the production itself will be (though that may well prove false, as well), but unusual in the way in which the show came about.

So, I've talked about my friend Matty, who is a very talented actor and writer. Well, it seems Matty is just a few credits shy of receiving his degree from The College of New Jersey. While a full time student there, Matty and his friend Steve caused a bit of a media storm by attempting to not only break the Guinness record for the Longest Continuous Kiss, but to also be the first same-sex male couple to do so. Matty and Steve's story inspired novelist David Levithan to write the 2014 Lambda Literary and Stonewall Honor Book Awards-winning novel "Two Boys Kissing." David has since become another of Matty's mentors and they came up with a way for Matty to earn his degree with performance credits.

So, when Matty asked if I would direct, I couldn't refuse. I have so far been able to cast both of the remaining male roles with actors I know and love and trust (my own dear David - not to be confused with Dear D - and my Hairspray and Jeffrey cast mate Chris) and am currently looking for the two women I need. I'm hoping to have our first read-through next week, as the show goes up the third weekend of March!

Because the JTMF was such an important part of his non-academic theatre education, he insisted that ticket sales be donated to our favorite LGBTQ causes.

I'll be sure to keep you all up to date. I'm very excited to stretch my creative muscles again!

The play was adapted into a rather excellent film in 1996: