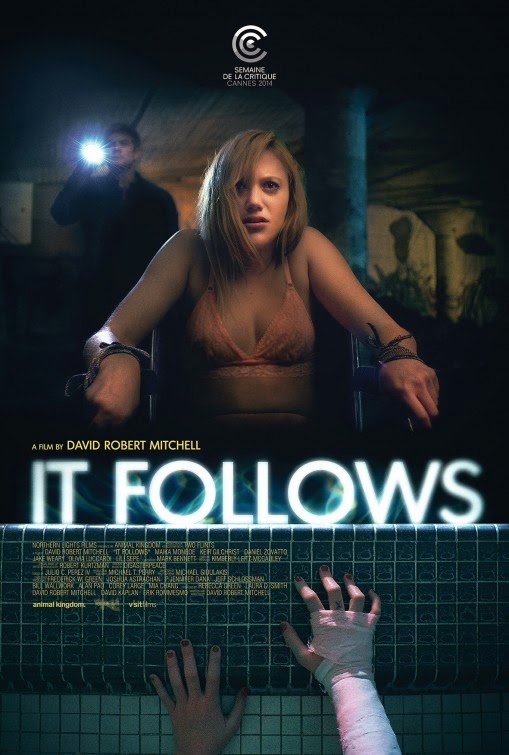 Sorry. It was very late when I thought of this post and I didn't want to forget to do it.

Whatever regular readers I have left know about my love of Horror movies, good and bad. And I'm always on the lookout for some interesting, original and startling works. And 2015 seems quite promising for this jaded genre guru.

Four upcoming Horror movies have particularly caught my attention with some rather intense trailers. And while I'd love to talk about Guillermo del Toro's Gothic ghost movie Crimson Peak, there isn't any footage from the closely-guarded film to share just yet. Still, these four upcomings movies are pinging high on my personal radar!

First up, a film from writer/director Adam Green (Hatchet; Frozen - no not  the Disney one). In Digging Up the Marrow, genre veteran Ray Wise plays a man who claims to have discovered an underground realm in which real monsters reside.

New writer/director David Robert Mitchell makes his wide-distribution debut with It Follows, an interesting take on "Tag. You're It!" Starring no one you know, the very atmospheric trailer seems like it could be the start of several careers.


Chris Sparling, writer of the claustrophobic Ryan Reynolds movie Buried, directs The Atticus Institute, about an attempt by the military to weaponize demonic possession. It's one of the most insane movie concepts I can imagine and I can't wait to see it!

And while this last movie is actually a prequel, I'm still very excited to see it. James Wan's Insidious was one of the most effective Horror movies of the last 10 years, though it's sequel disappointed. Wan's long-time writing partner Leigh Whannel makes directing debut with Insidious Chapter 3:


I know there will plenty more Horror movies in the coming year. What movies are you looking forward to seeing in 2015?