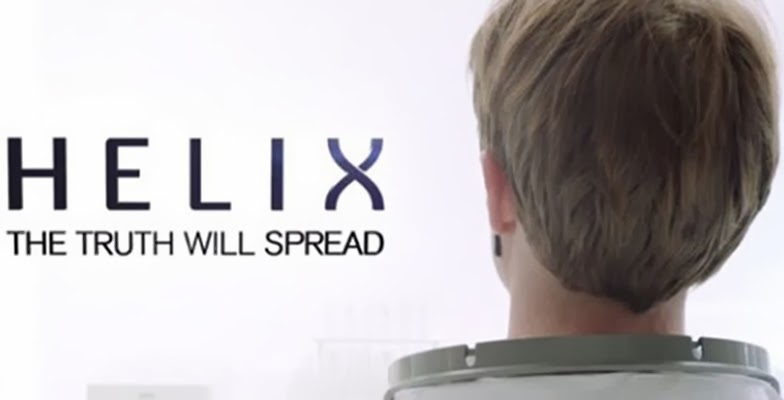 SyFy (I still can't get used to that silly name) debuted their latest original series "Helix" on Friday night with a double episode premiere.

Set in an underground bio-lab in the Arctic, "Helix" is ostensibly about a group of CDC doctors led by Dr. Alan Farragut (Billy Campbell), who are sent to investigate a possible viral outbreak at the unregulated facility. Farragut is recruited by his ex-wife ("Supernatural" alum Kyra Zagorsky) primarily because the only surviving victim is his brother Peter (Neil Napier), with whom said ex-wife had an affair which ended their marriage. When Farragut and his team arrive, they are injected with RIFD's in their palms, which supposedly give them full access to the entire facility.

Peter, near death with wildly fluctuating vitals and black blood when his brother's team arrives, somehow manages to escape his quarantined bed and rip his way into the facility's air ducts, using the severed hand of a security officer to access rooms now denied to him and spread the infection to other scientists. Meanwhile, a member of Alan's team learns that rats aren't the only lab animals in the facility when she is attacked by an infected rhesus monkey, after being told that no monkeys were present. It's obvious that something nefarious is going on here, especially after the facility's top scientist, Dr. Hatake (Hiroyuki Sanada), removes his contact lenses to reveal an unusual pair of reflective eyes.

I've been a huge fan of (and must admit to a massive crush on) the very attractive Campbell since first seeing him in The Rocketeer, a movie that should have done better at the box office and should have launched Campbell into an 'A-List' career. Most recently seen on TV as a disreputable politician in AMC's version of "The Killing," Campbell also starred as the leader of the cultish group of alien abduction survivors on USA's "The 4400," a show I loved and miss. He's still massively hot here and I would me remiss if I didn't admit that I'd watch him in almost anything in which he appears. That having been said, he once again holds his own among a cast of mostly unknowns in a series that offers few real surprises (so far).

Despite some dicey CGI effects and a storyline appropriated from several other sources (Stephen King's "The Stand" and John Carpenter's The Thing among them), I found myself thoroughly involved in and intrigued by "Helix" and am looking forward to seeing where it will go. And the upcoming appearance by "Star Trek" and "Body of Proof" alum Jeri Ryan will certainly appeal to both the str8 boys watching, as well as her many gay fans. Darker and decidedly creepier than my other SyFy favorite "Warehouse 13" (which is about to enter it's fifth and sadly final season), "Helix" has lots of potential. I just hope it lives up to that potential.

Love Billy and don't for get he was mouse's lover in Tales of the City. And OMG that bathhouse scene!

I was pretty impressed with the overall quality of the show BUT in a facility where they have implants can't they have an equally advanced way of keeping track of each person and in communication with them? I mean really, couldn't they just have a GRINDR like app to see where everyone was using those chips???? And who sits with their back to the gate, playing loud music when there is at least one infected, contagious and probably crazy human running around?

Other than that I wonder how long they'll stay in the facility. Is this going to be one of those series where one day takes several episodes?