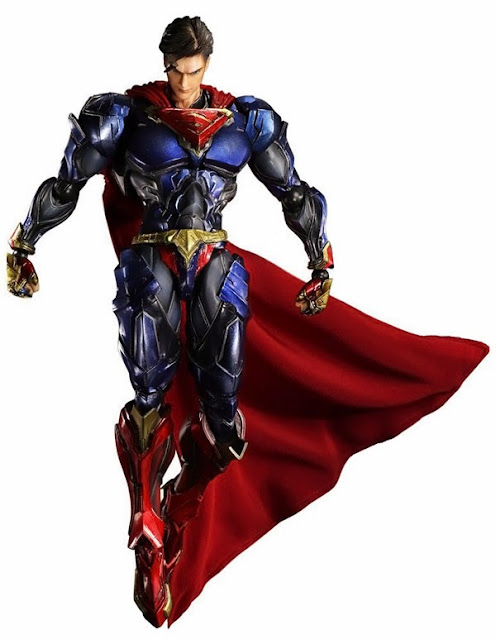 That's a new Superman action figure by Play Arts. It's part of something they call the Kai Variant Series. Now, while Uncle P remains an avid fan of  Superheroes, it has admittedly been many years since I've read any comics ("Watchmen;" "The Walking Dead" and "Chew" don't count). I think I was 13 the last time I read an issue of "Superman" or "Batman." And I know there have been changes in the timelines and weird revisions and alternate universes. I get it. But there are a few things I don't understand.

First of all, why does Kal-El need any armor, let alone Samurai-inspired armor? Or is this some official military dress uniform on Krypton? Or is this some sort of Cyber-Kal-El, enhanced by advanced bionics (look at his wrists) after some terrible accident, far away from the yellow sun? Or is Superman visiting the planet Krull?

But I think what bothers me the most about this particular action figure is it's disproportionately tiny head, which makes Supes look like a 19 year old twink headed out to a gay cosplayer rave in Vegas.

Personally, I like my Supermen to be Henry Cavil hot, Christopher Reeve compassionate and Brandon Routh adorable, with just a dash of George Reeves cockiness -- hold the Nicolas Cage, thank you.Wow! Talk about impossible standards... No wonder I'm still single. (Not LOL'ing here... No, seriously, FML). Oh, wait. Superman is fictional, isn't he? Never mind, then.

As a gay child, I think I figured out pretty early that many superheroes were in fact, gay allegories, whether they were intended to be so, or not. Outsiders, different from everyone else for whatever reason, who decided or were compelled to stand up against evil and protect the good, all why wearing fabulous spandex costumes with capes and amazing accessories (at least three designers featured utility belts last month in Paris). Eventually, both DC and Marvel were ahead of the curve by featuring gay characters (don't ask me what's going at DC right now, though) and even Archie Comics, once owned by a Christian publishing company, has a gay character with his own title, Kevin Keller.

And please, no comments about internalized homophobia. I don't hate twinks. I don't hate anyone. I feel very sorry for exceptionally ignorant and douchey a-holes who don't get that we're all in this together and we better figure out a way to make it work, or we're all doomed. I just hope I live long enough to witness their inevitable extinction.

This was an odd post ending an odd day (long story). So let's perform one more amazing segue to tie all of this nonsense together with Shocktober, shall we? I still haven't decided what I'm going to be for Halloween this year, though my fall back is the amazingly easily-achieved "Middle-Aged Gay Man."  In case you're still stumped, here are some ideas for Superhero costumes from last year's NY ComiCon: