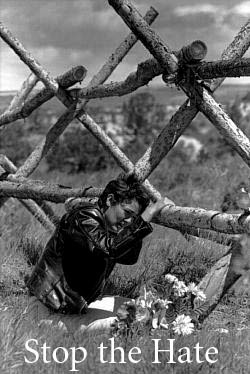 Tomorrow marks the 15th anniversary of the attack on Mathew Shepard in Laramie, Wyoming. My reaction is a confusion of "It's only been 15 years?" and "15 years, already?" Funny how witnessing history settles in your memory in so many odd ways. I remember crying when Matt died. Most of the world; the compassionate, empathetic and good people; the Humanists and the religious, alike - we all cried when Matt died.

On October 6th, 1998, Aaron McKinney and Russell Henderson lured Matthew from the Fireside Lounge bar, pretending to be gay, supposedly with the intent of robbing him. They drove him to a remote area, tied him to a buck fence and beat him mercilessly with their fists, feet and the butt of Henderson's gun. Matthew was found 18 hours later by a fellow UW student who'd gone off trail while biking. Six days later, Matt died from his injuries and the world cried.

Matthew Shepard was a young, idealistic and full of hope for his future as a social activist. He was attending the University of Wyoming and had joined the LGBT support group. Unfortunately, Matt was literally bullied to death. Along with Anthony Milano; Seth Walsh; Pheobe Prince; Kameron Jacobsen; Bailey O'Neill; Tyler Clementi and so many others.

Matthew's story inspired Moises Kaufman and the Tectonic Theatre Project to create The Laramie Project, a pastiche of interviews, memories and recreations of the events leading up the attack and its subsequent effects on the sleepy western town and her people, right through to the trials themselves.

Productions of The Laramie Project have often been (and I hate say, will probably continue to be) the source of conjecture, especially in educational situations. Most recently, a production at the University of Mississippi ("Ole Miss") was heckled by at least "20 members of the football team" and others. They supposedly taunted female cast members about their bodies; yelled "f*g" and "d*yke" and were generally disruptive. UM issued a lame apology, though Gay/Straight Alliance groups and allies like Brendan Ayanbadejo are pushing for more. 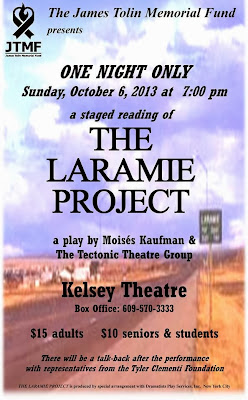 As part of our on-going campaign to prevent bullying and the unnecessary and premature deaths of so many young people, The James Tolin Memorial Fund presents a one-night only special event, a staged reading of The Laramie Project, followed immediately by a talk-back with cast, director and special guest, LGBT activist and member of the Tectonic Theatre Project, Cathy Renna. The reading will be held at the Kelsey Theatre on the Campus of Mercer County Community College in West Windsor, NJ. Curtain is at 7 PM.

As of this writing, tickets are still available online at Kelsey@mccc.org;  at the box office one hour before curtain or by calling 609-570-3333. All proceeds from this special event benefit The Tyler Clementi Foundation.

Let's put an end to this epidemic. Educate to Stop the Hate.

Don't let those whose lives have been taken by hate, be taken in vain. Share their stories. Share your stories. Reach out, but listen too. If you see an act of hatred, say something; call the police; do something.

I can't help but wonder what Matthew and my friend Tony would think about the massive strides since they've been gone. And how maybe some of those strides might have come sooner, if they were still here. Matt had dreams of being an activist and Tony was a very talented artist with a decidedly twisted sense of humor. What might they have accomplished in these many years? Sadly, thanks to hate, we'll never know.

If you can't make the show, you can always visit our website and make a safe, secure donation via PayPal. Or, watch the excellent HBO movie version and make a donation to your local anti-hate charity.


So... how do we Stop the Hate? How do we assuage the fears of those who don't understand? With works like this. With art that makes people think differently. With the truth, I would hope. Sadly, everyone's truth is different, to one degree or another. I don't care what you think your version of 'God" says about Queer people (yes, even the Native Americans who venerated us as 'magical' beings - thanks, but as much as gay folk might think we're magical, we really aren't). Different from most people? Certainly? Wrong or evil because of it? Hardly. And of course, I know I'm singing to the choir here, as it were. But it's more and more likely that most straight people know at least 1 queer person, whether they're aware of that person's sexuality or not.

Progress is being made an astonishing rate and things I never thought I'd live to see are happening all over the country. And while so many places in the world have yet to evolve, I can't tell you how happy I am to see the tide turning, at long last.

It is hard to believe it's been fifteen years. Matthew's short life impacted the LGBT community in so many ways, as have many others who have been bullied. It's nice to see a post like this also give homage to them. Thanks for sharing.