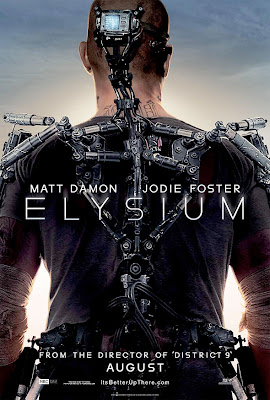 Okay, is it me, or have there been very few summer tentpole movies to actually live up to their potential once again this summer? And yes, I missed a lot of them, though only one by accident. And it seems as though I really didn't miss much...

This past weekend saw the opening of South African director Neil Blomkamp's big-budget debut Elysium. It took the number one spot for its opening weekend but performed far below expectations, beating out stoner comedy We're the Millers by just $3M. As a fan of Blomkamp's debut District 9, Uncle P was excited for this big-budget thriller starring Matt Damon and Jodie Foster. And then I started reading the reviews and had to take pause when Colin Berry, one of the Happy Mutants at the insane Science/Art/Maker/Literature/Politics blog BoingBoing posted his review, calling it "...everything that sucks about movies these days." (Read it here).

And lots of big-budget blockbusters saw similar fates. R.I.P.D.; The Lone Ranger; World War Z; and After Earth (even though it never advertised that it was directed by one-hit wonder M. Night Shyamalan) all failed, miserably. Guillermo del Toro's much-anticipated Kaiju Vs. Giant Robots movie Pacific Rim underperformed, as did White House Down with Channing Tatum and Jamie Foxx.

The top performers so far this summer? Despicable Me 2; The Conjuring (a movie I wanted more from); Monsters University; Man of Steel and Iron Man 3. I've seen only one movie on this list and liked it, but not nearly as much as some people.

No one is quite sure why some of these movies failed, though I suspect that audiences have finally caught on and want more than just CGI FX and deafening sound to carry a movie. To which I say: Hurray!

But summer's not over and I have high hopes for a few late summer/early fall releases:

That last clip is absolutely terrifying! I can't wait!

Did Star Trek not qualify for the list? It was great but came out during a bunch of other movies and kinda got lost I think.

I'm keeping my fingers crossed that we haven't seen all there is to see in Gravity.