I suddenly realized that the year is nearly over and I haven't posted my Best and Worst lists (yes, I know I did the Best Horror, but that only partially counts). I'm doing the worst list first, only because it's easier. I saw a lot of bad movies this year. Please remember, unlike the professional critics, I don't get to see every movie, so I can only opine on the ones I did. Counting down from 10, here are the worst movies I saw in 2008:
********
10. 10,000 BC

Hottie Steven Strait (The Covenant) plays half-naked caveman D'Leh in this preposterous story of mammoth hunters who find themselves prey to slave-making proto-Egyptians. When the only hot girl in the tribe is captured, D'Leh takes it upon himself to lead the search. Director Roland Emmerich (Stargate; Independance Day; Godzilla) proves there is no topic too ridiculous to tackle on the big screen. Despite the presence of many hot, half-naked men and women, 10,000 BC is just a mess.
********
9. Made of Honor

80's teen star Patrick Dempsey may have made a comeback of sorts on ABC's "Gray's Anatomy," but his movie career hit the skids once again with this deplorable romantic comedy that should have been called My Best Friend's Wedding 2: I'm Not Gay. Dempsey plays a womanizer whose best friend is getting married. It is only then that he realizes he loves her and despite being asked to be her "Maid of Honor," sets up to sabotage the wedding at all costs, lest of all, his dignity. Pure treacley crap.
********
8. The Mummy: Tomb of the Dragon Emperor 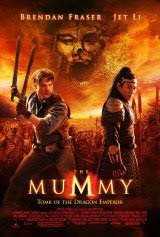 Oh, how I loves me some Brendan Fraser (especially mostly-naked, as in another bad movie, George of the Jungle). And I really loved Stephen Sommers' first Mummy film. It was fun and exciting and had some terrific CGI (not to mention 'yummy mummy' Arnold Vosloo). The Mummy Returns was okay, but not nearly as good. And eight years is a long time between sequels, folks. Long enough for studio execs to realize that the moment has passed. But it was not to be. This lame-ass picture, set in pre-war China, is just an excuse to extend a franchise beyond its prime. The talents of Jet Li and Michelle Yeoh are completely wasted here and Rachel Wiesz is the only smart one (her role is played by Maria Bello, another actress who should have known better).

7. Indiana Jones and the Kingdom of the Crystal Skull
I should have realized from the ridiculous title that this would not be the Indy movie the fans have all been waiting for. Yes, I enjoyed it on first viewing. But unlike the first three IJ movies, Crystal Skull just doesn't hold up. From the ridiculous (and infamous) refridgerator stunt to the CGI monkeys and the over-the-top performance of the usually brillaint Cate Blanchett, almost everything about this movie screams "Sellout!!!"
********
6. Sweeney Todd, the Demon Barber of Fleet Street


Okay - full disclosure: I played Sweeney in a truly great and very dark production in 1998. And while the film was officially realeased in 2007, it didn't go wide until 2008. which is when I saw it, with the man who directed the production I was in. Both of us loathed this film. Director Tim Burton (whose films I usually adore) removed all of the humor from Stephen Sondheim's brilliant operetta and turned it into a musical horror movie. Burton's favorite actor (and one of mine), Johhny Depp, proves that he can't sing and a role meant for a booming baritone becomes a whiny, reedy tenor with a shock of fake hair and a bad British accent. Sondheim should have sued. I would have.
********
5. Hancock

Director Peter Berg also made the terrible Very Bad Things, so it should be no surprise that his foray into the Superhero genre would be equally as awful. Hollywood's go-to good guy, Will Smith, plays the titular character, an alcoholic schmuck who causes more damage than he does good. He has no memory of how he came about his powers of what he's been doing for the last forty years, but that doesn't stop PR guy Jason Bateman from trying to rehabilitate Hancock's image. Of course, Bateman has his own problems with his gorgeous wife, Charlize Theron, who harbors more than a secret or two of her own. Boring and confusing, Hancock is just one more notch in Smith's 'mistake' column (along with Wild, Wild West and Seven Pounds).

Mike Meyers used to be funny. The Love Guru is proof that he isn't funny anymore. Pure crap, through and through.

I used to like Katherine Heigl. She's actually a good actress and was very funny in Knocked Up. Then she made the single most insipid rom-com ever. I'm trying not to vomit and block all memories of this film from my mind.

No clip or image here. I already discussed this movie as the Worst Horror Movie of the Year. It just also happens to be the worst movie of the year. Please, someone needs to tell M. Night Shamylan that his career is over and he should be happy that it lasted as long as it did. I'd rather see an Uwe Boll film than another piece of crap from this jerk. 'Nough said.
Next up, my picks for the Ten Best Films of 2008.
More of this, anon.
Prospero