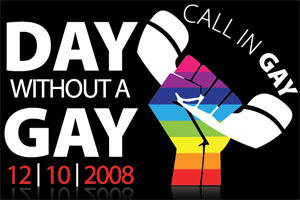 Wednesday, December 10th is 'Day Without a Gay.' Members of the LGBT community and their supporters are encouraged to take off from work (or "call in gay") and not contribute to the economy in any way, but spend the day doing volunteer work, instead. I will be participating and I encourage all of you to do the same.
But in all honesty, I have to wonder what impact this "strike" will actually have. In this uncertain economy, how many of us can actually afford to take the day off? I have personal time available to me at work, but a temp co-worker (and friend of mine) isn't so lucky. He has to work tomorrow to pay his bills, no matter how much he wants to participate. And while it is my fervent hope that employers and retailers will feel the pinch of the loss of their LGBT employees and customers for a day, I hope it doesn't backfire on us.
Political activism of any kind has always been a slippery slope. Without political activists, Americans would still be British citizens, women wouldn't be allowed to vote and African Americans would still be slaves. But "political activists" were also responsible for the single worst attack on American soil, ever, resulting in the loss of 3000 lives in a single morning. And in California and Utah, some LGBT activists are infringing on the religious freedoms of members of the LDS Church, whether they contributed to the "Yes on Prop 8" campaign or not. Yes, everyone has a right to believe in whatever religion they want to (even the followers of the infamous Flying Spaghetti Monster). But does the LGBT community have a right to deny them their faith, simply because we disagree with them? No.
What's the answer, then? I honestly do not know. What I do know is that everyone is entitled to his or her own opinions, whether you personally agree with them, or not. What is important, is how we address those differences on a mature and civil level.
So, stay home from work on Wednesday. Volunteer at your local LGBT Center. Donate money to your own state's anti-discrimination causes. Go to a hospital and spend an afternoon holding an AIDS baby. Just don't be like Pat Boone - old, ignorant and bigoted:
More of this, anon.
Prospero
Posted by Prospero at 10:25 PM