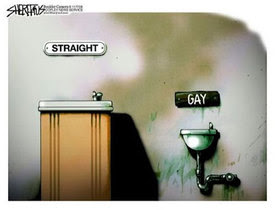 I know I promised to stop politicking, but California's Prop 8 debacle has everyone in the LGBT Community up in arms. As we should be. And so should our straight allies. The fight against bigotry is education. And I'm not talking about teaching homosexuality in kindergarten - that's just patently absurd. Would you teach about heterosexuality in kindergarten? Hardly. In fact, I'd want any kindergarten teacher who taught about sexuality at all, arrested immediately. I'm talking about educating the public in general. It's the 21st Century, folks. We're not going away and we're not about to get any quieter about it.
I've always found the old saw about pictures speaking louder than words to be so true. More people need to see images like the one above (via Towleroad).
Then there is this encouraging and appropriately ironic news from LAWeekly: Apparently, anti-Prop 8 protesters are denying Mormons the right to marry.
http://blogs.laweekly.com/ladaily/queer-town/los-angeles-protests-stop-morm/index.php
And say what you will about MSNBC's Keith Olberman (who can sometimes be quite the pill, no matter what your political leanings may be), this is the most heartfelt commentary I have ever seen. I urge you all to share it with everyone you know.
********
And finally, just to lighten the mood, this very funny and silly commercial parody from SNL (I must admit I've taken quite the fancy to Will Forte):
See more funny videos at Funny or Die

More of this, anon.